Strangers Step Up to Help Students 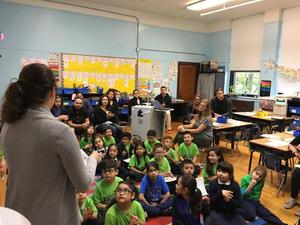 Acero Schools has been in the headlines this week thanks to a teacher’s passion for her students and the kindness of strangers.

Kimberly Bermudez, a 1st grade teacher at Fuentes Elementary School, was flying to Florida to visit her parents when she struck up a conversation with her seatmate.  She told him about her work at Fuentes and her admiration for the parents who sacrifice to make sure their children have the basic necessities. She also told him how teachers and school administrators spend their own money to buy school supplies and other necessities for the kids.

Her seatmate said that his company donates to schools and asked for the school contact information so that he could send a donation.  Several other passengers who overhead the conversation also said they wanted to contribute and handed her money before she left the plane, with one telling her to “do something amazing.”

In total, the passengers donated $530 to help buy supplies for her students. Kimberly was overwhelmed by the generosity and posted about it on Facebook to share with her friends. It caught the attention of a reporter at the Washington Post, who wrote about it.  From there, the story took off like wildfire, with interview requests from local Chicago news stations, as well as outlets like USA Today, CNN, the BBC, Access Hollywood and Inside Edition, to name a few.  Her story was even featured on NBC’s Today Show.

As a result of all the media attention, the school has received approximately $2,000 more in donations. Kimberly has also heard from numerous friends and family members, including many of her own former teachers.

“I am in total shock with the amazing chain reaction,” she said. In addition to classroom supplies and after-school programs, she is hopeful that some of the donations can go toward the school’s goal of building a playground.

“The response has restored my faith in humanity.  I never thought it would turn into what it did.  I also plan to use it as a teachable moment for students on how something you post on social media can spiral very fast. “

“We are so proud of Kimberly Bermudez,” said Richard L. Rodriguez, CEO of Acero Schools. “Celebrating and supporting our students and hardworking families is central to what we do. This is a perfect example of living all of our Acero values.”